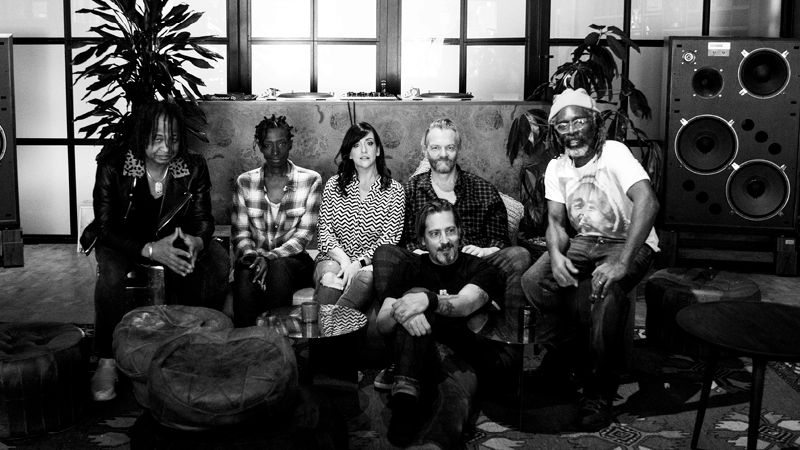 Across a career that stretches 26 years, Brooklyn Funk Essentials have established themselves as an audacious project fusing soul, hip hop, spoken word, jazz and, of course, funk.

Between recording six studio albums, the Essentials have made a name for themselves as absolutely electric performers, exhilarating their loyal and adoring fanbase with performances across every continent. Established in the early ‘90s by Arthur Baker and Lati Kronlund, Brooklyn Funk Essentials were regulars of New York’s vibrant club scene by the time their debut album, ‘Cool & Steady & Easy’, hit the shelves. Released by pioneering funk and electronic taste-makers Dorado Records and combining classic funk’s raw, mind-bending basslines, peak-era disco’s euphoric vocals and early hip-hop’s observational lyricism, the album was an immediate hit in the US and elsewhere, securing a No 1 spot on Billboard’s Alternative R&B Album of the Year chart in 1995. Tracks like ‘Take The L Train’ and ‘Big Apple Boogaloo’ became DJ favorites, while their version of Pharoah Sanders’ and Leon Thomas’ classic ‘The Creator Has A Master Plan’ reached into the Top 20 singles chart. The success of the album ensured much international touring for the band.

A particularly inspired tour in Turkey in 1996, resulted in the band recording their second album, ‘In The BuzzBag’ in Istanbul. A collaboration with the Turko-Roman folk band Laço Tayfa, lead by young clarinet virtuoso Hüsnü Senlendirici, the project injected complex Turkish rhythms and instrumentation into the Essentials’ already expansive sound palette, earning them a US Grammy nomination in the process. The song ‘Istanbul Twilight’ was the theme for Fatih Akin’s hit movie ‘In July’ which also featured another three songs off the album. With their third album, ‘Make Them Like It’ from 2000 on Dorado Records, Brooklyn Funk Essentials were back on their home turf funk-disco-jazz sound, delivering classics such as the incongruous x-rated p-funk of ‘I Got Cash’, the boogie/disco/dub of ‘Date With Baby’ or the raggaboogaloo jam of ‘Mambo Con Dancehall’. Sharing the stage with giants such as James Brown, Parliament-Funkadelic, The Fugees, The Meters and Erykah Badu, the band toured extensively throughout 2000 and 2001, ending with a show at the Festival de Vieille Charrues in France, where Brooklyn Funk Essentials played to an audience of 80,000 people. ‘Watcha Playin’ released in 2008 on Comet Records, marked the end of the band’s five year hiatus following 9/11. With fan-favorites such as ‘Dance-Free Night’, ‘The Park’ and ‘Need’ the band explored deep grooves and complex vocal arrangements and featured guest appearances by Hüsnü Senlendirici and Tunisian rai-star Amina Annabi.

Twenty years after the US release of their debut album, Brooklyn Funk Essentials dropped ‘Funk Ain’t Ova’ on Dorado Records in 2015 - which would turn out to be their most successful release to date. The single ‘Dance Or Die’ quickly racked up over 2 million spins on Spotify, with songs like ‘Blast It!’ and ‘Prepare’ in close tow. Recorded in Brooklyn and featuring most of the band’s original members, the core of the band lived in Europe by this time. During touring in support of ‘Funk Ain’t Ova’, Brooklyn Funk Essentials were joined by UK soul singer Alison Limerick, for whom the band’s leader Lati Kronlund had written and produced the house anthem ‘Where Love Lives’ in the early 90s. When the band’s original singer, Papa Dee, left the band in 2016, Limerick stepped up as the new lead singer along with long-time singer and guitarist Desmond Foster. Recording of the upcoming ‘Stay Good’ album began in 2018 in Stockholm, Sweden and Birmingham, UK and the album was released worldwide in September 2019. Spearheaded by the singles ‘No Strings’, ‘Ain’t Nothing’, ‘Watcha Want From Me’ and ‘Funk Ain’t Ova’, the album clocked a million Spotify spins in it’s first three weeks of release.

On ‘Stay Good’, the band chose to work in the studio as they do on stage - as a tight-knit six-piece band, and keeping guest appearances to a minimum, with the exception of vibraphone wizard Roy Ayers appearing on the slo-jam ‘Breeze On Me’. Other tracks include the Frankie Knuckles copenned ‘Watcha Want From Me’, the space-funk of ‘Funk Ain’t Ova’ and a dub-jazz version of Joe Henderson’s ‘Y Todavìa La Quiero’. The album closes with Brooklyn Funk Essentials version of ‘Where Love Lives’ of which Mo Bangles Michael Rand said: “Brooklyn Funk Essentials are proving once again that it takes freeform inventiveness to turn out life changing music, and they just happen to be the best in the business at it.” ‘Stay Good’ proves that, twenty-six years after the band’s formation, Brooklyn Funk Essentials are releasing new music, which is some of the most successful throughout their career. The album release was supported by extensive touring, which also included their first ever show in India, where the band headlined the Mahindra Open Drive festival in Goa in November 2019. Brooklyn Funk Essentials are: Alison Limerick - lead vocals Desmond Foster - guitar and lead vocals Anna Brooks - saxophone and vocals Iwan VanHetten - trumpet, keyboards and vocals Hux De Lux - Drums Lati Kronlund - Bass